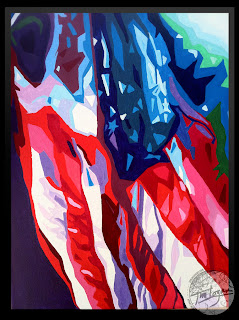 The American Flag sold from Norberta Philbrook Gallery. I'm not aware who the buyer is at this time, but thanks to that person and to Raven for being such a wonderful gallery owner! I took the photo from which this was painted about a year ago. The flag was looking rather droopy and weather-worn following a storm that had blown through the night before, but the sun brightened it from behind (opposite me as I took the photo), and I was very pleased with the effect. A bit of abstraction suggested by PhotoShop gave it the jagged look, so I thought it deserved a canvas. I gave it a high-gloss varnish, which gives it a nice gleam. The companion, Arkansas Flag on the Bentonville Square, is available, as well.