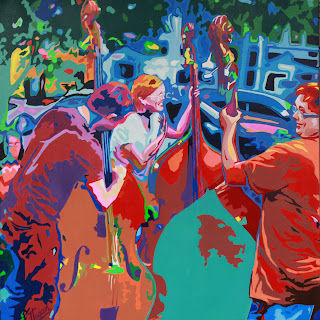 The pickers on the square are a constant commodity on Friday nights in Bentonville. There are several gatherings of local musicians, each claiming a corner, turning downtown into a pickers' paradise. We ran across these three upright players one Friday night in June. Kind of unusual to see three basses playing together, and they were clearly having a blast.

When I examined the photo I had taken, I felt that the color of the moment didn't come through. That's what I wanted to portray, the brightness, the musicality, the frivolity that was so prevalent when we stood there listening to the trio in person. That led me to experiment with Photoshop and Illustrator treatments, and I started feeling the same joy that the trio seemed to feel. I loved the color shift idea, because it made the photo explode with hues and tones that the natural eye doesn't see in the same way. The painting celebrates color, music, joy, presence, humanity, and community.