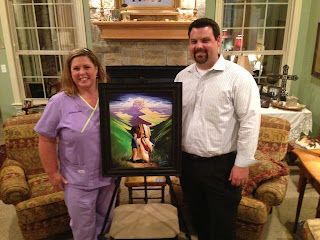 It was a pleasure to work with Stephanie and Jerret on a commission for Stephanie's grandfather. They wanted a depiction of a vision he tells about in which he encounters Jesus on a pathway that leads to a beautiful house on a hill. The pathway is blocked by a huge, square boulder, and Jesus tells him that he has more for him to do on earth and he wants him to stay longer. The hardest part for me was the house on the hill! I just couldn't seem to get a handle on what it should look like. I put it off until last, hoping Grampa's vision would become my vision!

They plan to frame the painting in a way that incorporates a digital device that will play a recording of Grampa telling the story of his vision at the push of a button. Very unique! 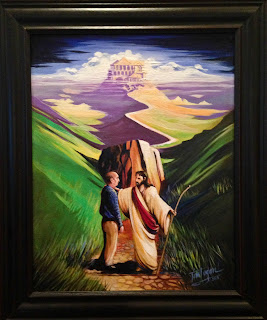 Thanks, Stephanie and Jerret, for asking me to take this on. It was indeed a challenge, and one that I thoroughly enjoyed. I told them that the daunting thing about doing this was imagining Grampa seeing it, then saying, "That's not anything like what I saw!" Hope that's not the case, but Stephanie and Jerret seemed to truly like what I painted, so I hope he does too.