I'm busy getting ready for the Bentonville Convention and Visitors' Bureau exhibition in November.

Trying some new stuff, a series of Bentonville landmarks based in a style I've been developing for a while, but using some "out-of-the-box" techniques, like marker on acrylic on canvas. Kinda crazy, I guess, but it's fast and fun. Love doing them. It's interesting to view them from a distance, as they look like bold oils, but then move closer to see the intricate marker work and the multitude of colors. Getting some colors that you can't get with paint. A little strange, I know, but we'll see what happens.

The one on the left shows the Bentonville Convention and Visitors' Bureau. I took the photo at a Saturday morning Farmers' Market. The two fellows are always there selling beef from their trailer.

The center work is an old church building near the square. It's been several things since the church moved, but now, it's not being used. The last incarnation was a restaurant called The Sanctuary.

The image on the right is from a photo I took at the Crystal Bridges members' preview before the official opening last November (2011). It shows one of the glass-enclosed galleries, and what fascinated me was the multiple reflections in the glass windows. There were only three people standing to the far right. 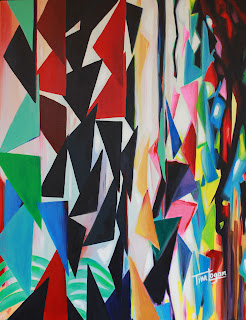 I have finished the Mustache Window painting, which I hope to put up at the Mustache soon, as well as including it in the November show. It was a great exercise in moving from controlled to loose brushwork in the same painting.

If you didn't see the actual window in their Bentonville store, it was comprised of a "curtain" of colorful triangles. I understand the owner's daughter does the windows (which are always fantastic) and she has some other excellent art pieces in the store (check out her cats). The painting has a very abstract quality, but is quite realistic, actually. The photo of the window looks nearly identical to the painting.

TIM!!! The Sanctuary is AWESOME!!! How come I've never seen these before? I knew you were an uber talented doodler, but these are incredible!